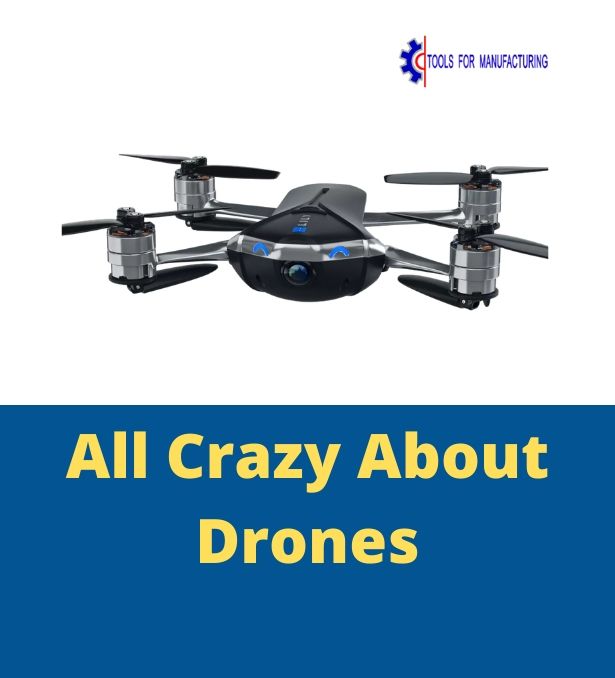 There are those who already own several models and those who dream of buying one, those who use them daily for work and those who simply fly them waiting patiently for the weekend, the drones are now on everyone’s lips , including that of children ( especially boys) who for some Christmas now seem to have asked for nothing else. All Crazy About Drones.

But what are the secrets of this boom, which closely resembles what smartphones involved years ago?

Videos and Photos from Above

Speaking of smartphones, there is no doubt that the secret of their incredible success was making mobile phones capable of taking photos. Everyone loves taking pictures (and especially taking pictures), and drones have the advantage of taking all this to a new level, the one seen from above.

And be patient if the cheaper models fly for a few minutes, producing videos and photos of not excellent quality, the selfies from above will soon become a new fashion .

Let’s think for example about weddings. Where now the video made with the drone that rises from the ground and widens the view until the newlyweds and all the guests are taken. Has become a standard for wedding photo shoots.

There are not only services for weddings, of course.

From inspections of industrial plants to the search for the damaged piece. To the analysis of crops to determine which plants need additional fertilizer. Passing through the search and rescue of missing people or victims of environmental catastrophes. In fact, there is no job in the world that drones have not shown they can perform well. Often even better than human workers.

The advantage is in times and costs. But also and above all in the safety of people employed for work in risky areas.

Drone, unmanned aerial vehicle – words that have only recently come into use. Remote-controlled small-sized aircraft today have begun to actively adapt to a wide variety of needs. Both in the economic sphere, and in the defense and security sectors. All Crazy About Drones.

The next important area in the use of agricultural drones is the processing of crops to protect plants from diseases and pests and the application of mineral fertilizers. One of the advantages of working in this direction is that the aircraft. Using the data from digitizing the fields, is able to do this work much more accurately and better. He is able to spray poisons or spread fertilizers exactly over the field surface specified in the program or visible by the operator. This allows you to avoid both ineffective application of plant protection products (when a liquid or powder sprayed from an airplane is blown away by the wind) The danger of poisons getting into those places where they can harm people or animals. When such work was carried out using agricultural aviation. The pilots often missed and “covered” farm buildings and residential buildings or pastures.

Ground vehicles have serious drawbacks: harmful substances get into the cab and many machine operators refuse to do such work. For the same reason, it is not recommended to carry out processing using trailed equipment if the wind speed is above 5 m / s. In addition, due to the more accurate performance of work on soil or crops. The consumption of fertilizers or poisons can be reduced.

Another solution could be the technology of fine droplet spraying. For example, the use of the “Zarya” apparatus. Which uses the principle of a rotating mesh drum to create the possibility of low-volume (ML) and ultra-low-volume (ULV) spraying of plants. In addition, copters are used for seeding. According to the developers. This technology allows you to reduce the cost of the operation by 85% – 10 square kilometers of forest can be sown with seeds in just three hours. Which is eight times faster than required for the same operation, but using conventional technology.

Scientists and engineers continue their attempts to adapt UAVs for new jobs in agriculture. They are working on increasing the carrying capacity and autonomy, developing software and equipment, training programs for operators. And every day more and more possibilities of these aircraft are opening up. And at the same time it becomes noticeable. How one of the most conservative spheres of human activity – agriculture, is transforming, turning into a high-tech sphere. In which engineering and digital technologies will play a huge role.

Read More: How to see passwords saved on Android

To fly with a drone inside a large sewer, looking for damaged pipes or clogging, great attention is needed. But if instead the aim is to have fun then flying it is child’s play .

Almost all drones dedicated to entertainment can also be piloted with a smartphone or tablet. All Crazy About Drones. Which with the use of a simple app to be installed are transformed into perfect radio controls. Capable of controlling every movement of the drone through a simple connection via Wi- Fi .

Often, the command app also has preset controls thanks to which the drone carries out aerial maneuvers completely automatically. Which, in manual mode, would require several hours of practice (and accidents).

If the drone in your hands is not a simple toy. But a model with advanced functions and a significant cost (we are talking about at least 200 $). It is easy that you do not just have to fly inside the house or in the garden. But you want do this (always following the regulations) even in open spaces. Where the risk of causing damage (also to others) and that of losing the aircraft (for example following the loss of signal) are much greater.

For this reason it is strongly recommended to attend a course to learn to fly with the drone.

There are many flight schools in USA( here you find a list of the main ones ). Which offer courses with variable costs and which are calibrated on the intended use of the drone. For example there are courses for future professionals and courses for simple enthusiasts .

may seem not very risky. But the truth is that flying with the drone does not reduce to the ability to avoid obstacles. Includes a whole series of important notions for the safety not only of the pilot. But also of the community .

Taking a look at the pages of the newspapers. In fact, it is easy to see that there are not a few. All Crazy About Drones. Even just looking at the last year, the cases in which an amateur pilot has been seized the vehicle. Because he was flying in a no-fly zone. For example because without realizing it he had invaded the airspace of a nearby airport.

Parts of Pants: Different Types of a Jeans Pant Part with...